Click on a candidate to read his or her bio

Every couple of years, members of the MAPOR Executive Council look over the existing MAPOR bylaws to see if any changes are necessary.  In the latest council review, we determined that a number of small changes were necessary. These changes (and their justifications) are described below.

You can see the detailed proposed bylaws changes by clicking here (Note: the track changes in the document do not show up properly on mobile browsers). You can also post any general comments you have about the changes on this post. They will appear as soon as a member of the council has had a chance to moderate them.

A couple of additional items were raised by members and we have added language to address those in the attached draft of the proposed new bylaws with changes tracked.

To see and comment on the proposed bylaws changes, click here (Note: the track changes in the document do not show up properly on mobile browsers).

As always, MAPOR members are making a big showing at AAPOR this year in Denver from May 16-19. This year’s AAPOR is chaired by former MAPOR president Trent Buskirk and features dozens of presentations by MAPOR members.

Click here for a list of some of the exciting things MAPOR members are doing at AAPOR.

Want to learn more about what is happening at this year’s AAPOR conference? 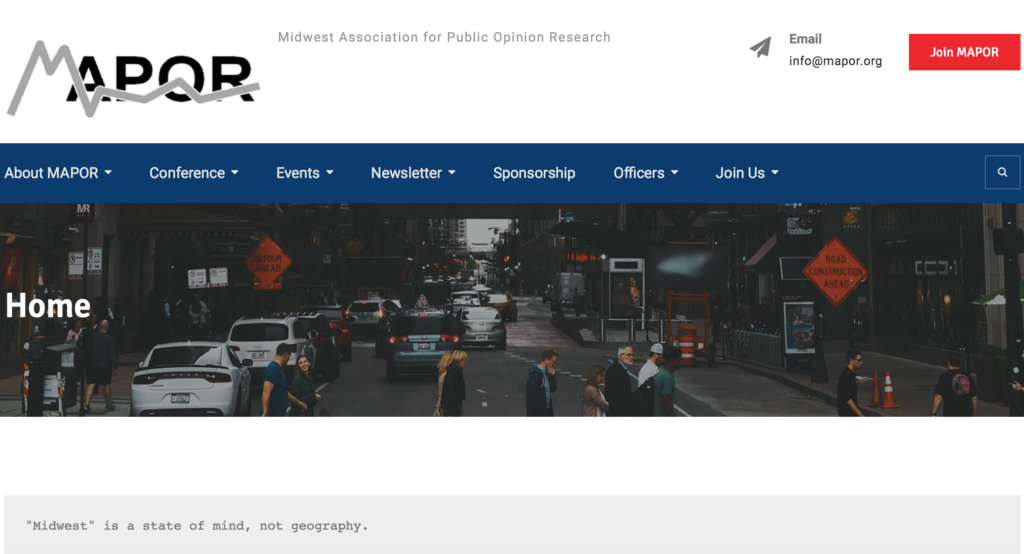 On behalf of the MAPOR Fellows, 2016 Fellows Julie Andsager and Joe Murphy announced the winners of the 2017 student paper awards:

Social media use, exposure to disagreement, and offline expressive participation: The moderating role of self-censorship

Click here for more information on the MAPOR student paper awards and a list of past winners.

MAPOR is pleased to announce the election results:

On October 15, 2014, MAPOR Executive Council adopted MAPOR’s current Strategic Plan. This strategic plan is to identify key initiatives that are underway at MAPOR and set the stage for MAPOR’s growth for the next five years (through 2019). To update our members on our progress on meeting the goals and strategic objectives included in the Plan, in November 2017 MAPOR Executive Council released a Progress Update.  Click here to read more.